The Magnolia Hotel & Spa in Victoria, British Columbia  announced the opening of their new  restaurant, The Courtney Room, later this spring.

“Old world meets the new world in The Courtney Room, which is opening in our 20th anniversary year,” says Bill Lewis, general manager at Magnolia Hotel & Spa. “Now owned and operated by the hotel team, we can’t wait to reveal the bright, elegant new room, and share Chef Sam Harris’ menu, inspired by both land and sea.”

Working with  interior designer Sharon Bortolotto from BBA Design, the firm responsible for the hotel’s guestroom refresh, and are excited to work with the team from Glasfurd and Walker; designers of innovative brands such as The Botanist in Vancouver. The Courtney Room will be designed in the  style of a classic French bistro, with elements of Art Nouveau. High ceilings and bistro style lighting create a casually elegant ambience – focal features include commissioned artwork by Blu Smith in an abstract expressionist style and a central black granite bar framed between two paneled wood columns with white marble chevron detail – a place to gather and be seen.

Just steps from Victoria’s picturesque Inner Harbour, The Magnolia Hotel & Spa wins over guests with its unbeatable location and service. , Forbes Travel Guide  rated the Magnolia Hotel & Spa is proud to be listed with a four-star rating for its fifth year in a row, one of only four properties on Vancouver Island to meet the rigorous standards.

Enjoy a Luxurious Weekend Away at the Fairmont Winnipeg 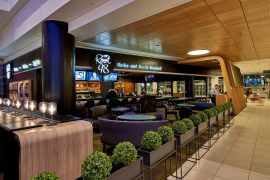